Ciutadella Park in Barcelona, the moment of robbery, Photo, 2015

Once upon a time, Anton and Marika stood on the Barcelona Zoo lawn, taking photos of each other in the dark. It was night. They were naked because had been smeared with medicine gel, standing with legs and arms apart to dry, and their bodies looked shining. It was a moment before the irrigation system was about to turn on, of which Anton and Marika had no idea: fountains of water in the dark would rush on them in half a second. Artists have not noticed that they were spied on from the bushes by those who would steal all their things a few minutes later. 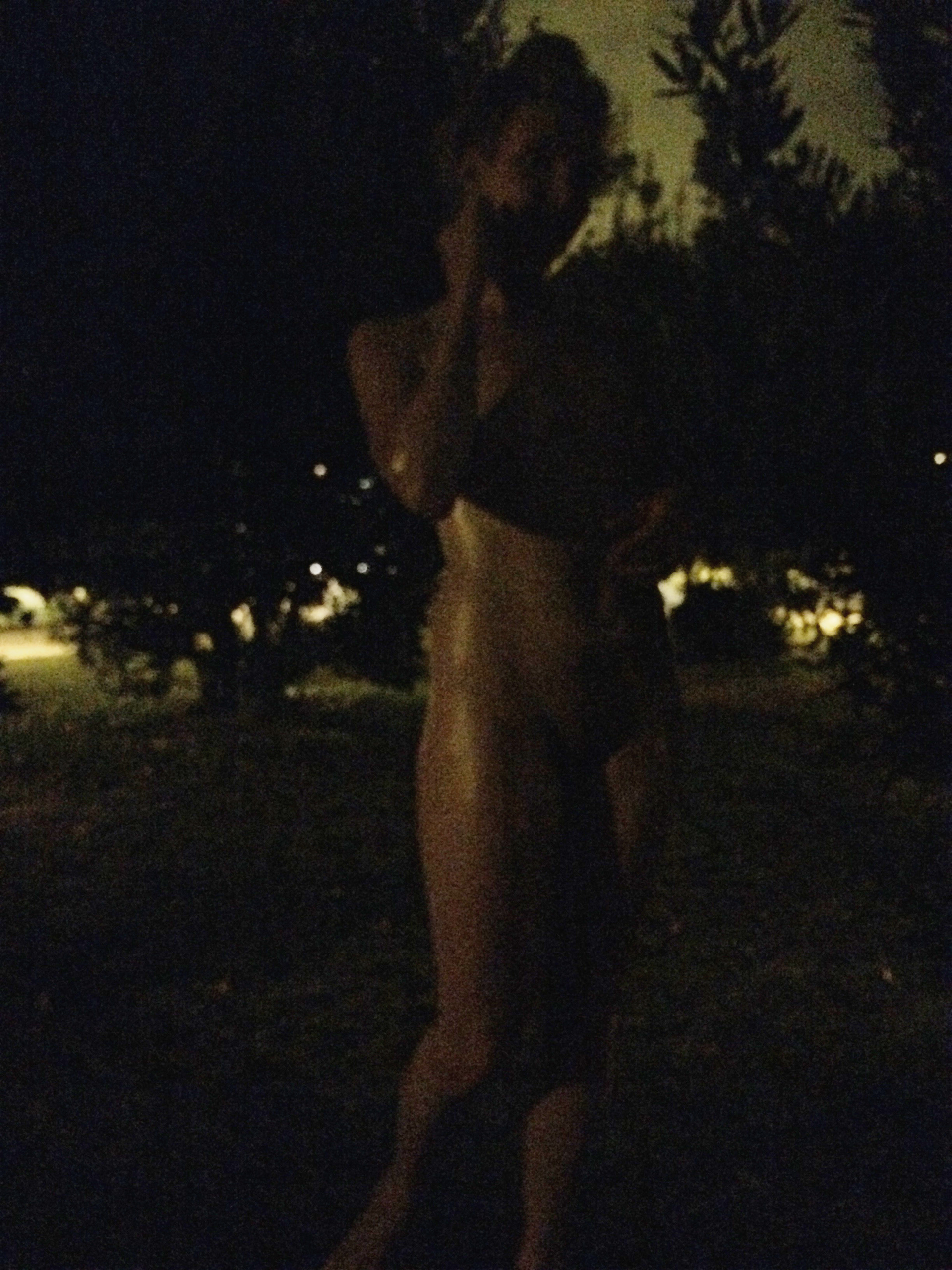 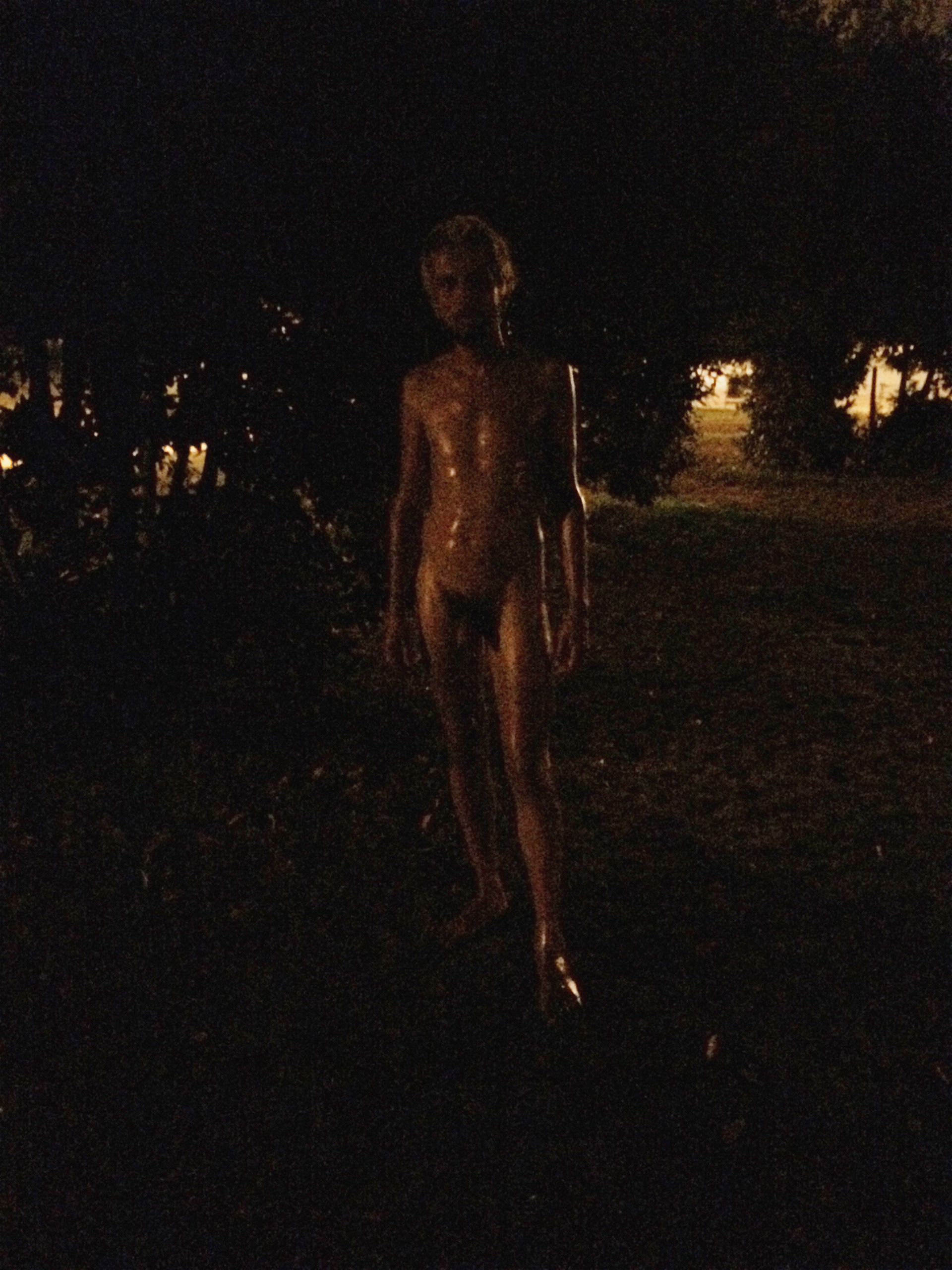 Photos on the lawn, 2015
If one in his solitude drops out of the interhuman world, two always carry it. Anton Kryvulia and Marika Krasina met at the Murano pier at the end of 2014, turning up from different locations. That same night they threw all their swag into the lagoon. Getting dressed up in a Chinese store like a royal family in exile, artists flew to Nepal, with the notion not to come back anywhere.

Marika and Anton stopped enclosing themselves in flats with a world beyond. So often as can converse and think, they detect the world inside any room. Artists no longer live in one place, and not because lack one. But the opposite — everywhere is the same spot, same capacity. Marika and Anton (M&A) work everywhere: in the forest, in the city, on the fields, in the cabins, in the boats, on the night road, wherever could talk to each other.

“On the sideway in Budapest, Luang Prabang, Rome; on the rooftop in Seoul or Kathmandu; on the balcony in our studio on Rabochaya St. in Moscow; in a cafe in Porto or Cadaques — everywhere is the same still stream, into which you can step twice or trice, you may ever enter it.”

In Dresden, artists rented an office in an empty administrative building. The chief — a Pegida voter and Putin admirer, leased a room on the terms that they would not live there. M&A settled there down with parrot and soon occupied the entire level. They compiled an index of all the things in their room and reflected that it meant something. Titled this work Common Body; since then, artists have been fixing this body’s state, rendering new lists of belongings wherever happen to be.

Anton and Marika stuck that summer in Barcelona without money. Besides, they had to cure scabies. That night in the zoo, they undressed, smeared with special gel on each other, and were waiting for it to absorb into the skin. The summer was hot, and when the automatic irrigation system started to work, they and their things got wet instantly. They hung clothes on the trees around the brightly lit empty dance arena and climbed onto it. M&A had a large roll of paper with them; began to paint it with ink and palm leaves. Were they robbed already? Yes indeed.

In August 2015, Anton and Marika recreated the details of the robbery of artists in Barcelona. The exhibition in Dresden consisted of a story about the event, a video on the screen of a mobile phone, a list of stolen things, and the installation of those things that remained after the robbery. more

So it turns out that the sharpest and precise observations objectify in the most paltry artifacts. The events of that night still set the scale for artists' work. “We are stretched between a spatial body and the event in the dance arena's space, addicted to the game, while someone taking our things.”

This limited bunch of things becomes their constant companion, forming something like a common body, over which Anton and Marika follow with interest; that mysterious ontology of things gets the matter of all M&A artistic works. Artists turn their belongings into art objects and then return them to everyday use. Things' artistic destiny is instant and solemn; they never become a product, but return to their source, revealing a flickering trace of Nonknowledge on themselves.
Next→Whatever